Why I Started an Internet Music Group Exclusively For Female Artists

Why I Started an Internet Music Group Exclusively For Female Artists

I want to bring to light something that I know plagues Indie artists, especially female artists…something that not many people want to talk about…​something that you are probably feeling right now or have felt in the past…

I know all about those crippling emotions.  I felt those everyday for ten years when I though about my music career.  They made me feel like giving up.

How I Found My First Internet Music Group

But then I went to an event and met an artist who was performing the kind of gigs I wanted to perform, who had a solid presence online and had built a real fan base.

Of course, I was jealous!

But instead of succumbing to the green-eyed monster…I decided to befriend her and try to “pick her brain.”

Luckily, she was very gracious and generous with her time and advice. Not only that, but she had started an internet music group, a group of like-minded musicians just for female artists, and she invited me to join.

I felt like I had hit the jackpot! And, in terms of my future career growth, I had.

I jumped into the group discussion with both feet. I learned everything I could from the women there. They all had such diverse backgrounds and experiences to learn from. And what was more, they were all so helpful, giving and kind. None of them were stingy with their knowledge or their time. 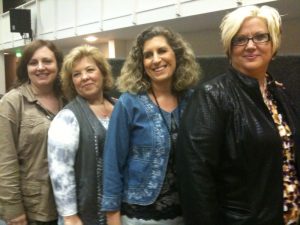 Why was this the case? Because the founders of this internet music group created a culture of generosity, reciprocity and “paying it forward”.  Everyone had an “abundance” mindset. They felt there were enough gigs and fans and sales for everyone.

They were genuinely interested in the promotion and success of all Indie artists because they believed that if you help one another, “all boats rise with the tide.”

I can trace most of my success as an Indie artist back to being a part of that group for several years. Spending just 30 minutes per day talking with the women in the group gave me the confidence, know-how and energy to build my career from almost complete scratch.

Why I Started An Internet Music Group Exclusively for Female Musicians

The biggest benefit to my joining the internet music group was I was no longer alone, isolated and afraid. I had a group of women who had become like sisters to me (as close as sisters can be having never met in person) to give me pep talks, guide me through the ugliness, and celebrate with me when I hit milestones.

That’s the kind of community we have in my paid programs. It’s freaking awesome!

But then I realized that the people who REALLY need a community are the ones who aren’t in my courses and paid programs yet.

The ones who are just starting out…or are stuck….or overwhelmed…like I was.

Sooooo…I knew it was time to create a free community that serves exclusively female artists. I wanted to be to you ladies what that group of woman was to me over 10 years ago…

And the Women of Substance Community for Female Artists was born.

My internet music group is a nurturing atmosphere of like-minded women, putting their collective heads together, full of knowledge and experience, for the greater good of us all.

Join us in the Community.

And of course, in the spirit of the group, I made it super easy for you to share the link with your musician friends who you know need a supportive community to buoy them through the storm of the music industry (OK – that line sounded a little cheesy but still rings true:)

Just tell them to go to WOSCommunity.com – that’s it. It’ll take you straight to the group.

And just in case you’re thinking about spamming in this internet music group with tons of self-promotion (I know you’d never do that!), we have rules against that and heavily monitor posts to ensure that people abide by the rules so we can create a fun, safe and nurturing community, not a “pitch fest.”

But don’t worry – we do provide specific threads where you can “pimp” your stuff, ask for “likes” and “follows” and “comments” and all that cool stuff that is possible with a group who’s really trying to help each other out. Just watch for the appropriate thread. And if you ask for a favor, just promise me that you’ll reciprocate (I know you will).

So hit that link – WOSCommunity.com – and I’ll talk with you in the group.