How The Music Industry Works

I can’t tell you how often I hear musicians getting bad advice and feedback about how the music industry works that I just want to scream “wait! no! Don’t listen to that – it’s just not true! I’m proof that you can do it despite the challenges!”

The big problem is, the people who are the so-called “Industry Experts” giving the advice have a completely one-sided view of the Industry. They are comparing US to say all those Disney stars that are coming out these days into the adult music world.

They’re young, they’re “pleasing to the eye”, they don’t mind “wiggling and jiggling” their body on camera…

And they can get away with that. But many of us can’t.

Some of us, like me, are over the age of 40, have a “mom tummy” that we can’t seem to eradicate no matter how many sit ups we do, and the idea of “shakin’ it” on camera is laughable.

BUT we are still talented, passionate musicians with a message to share with the world. Isn’t there a place for that in the Industry?

YES there is. But we need to carve out our own niche.

The record execs look at the world chiefly from the “bottom line” perspective. They only have so much money to invest so they have to pick sure fire winners.

I have been a Director of Finance for an opera company before so I understand their perspective and I really can’t blame them.

BUT we can’t let that fact dissuade us from pursuing our career. Because in this era of the music industry, WE have the power to make it happen for ourselves. And we don’t have to wait around either. We can do it right now! 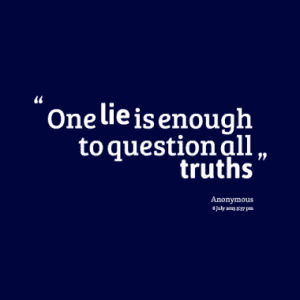 And that’s just the beginning of the lies we let hold us back from really digging in and starting to actually build a career from music.

WHAT! It took me 10 years after graduating college to actually figure this stuff out. By then I was 32. That’s when I recorded my first studio album.

I had my biggest touring and income year when I was pregnant with my second daughter. But by that time I had built up a reputation based upon my talent, my songs and my personality. No one cared that I was wearing maternity clothes.

And I have students who have jumped back into the game after taking a break for various reasons. And they are making consistent money from music.

Age ain’t nothin’ but a number! Your talent and passion will outshine all the ravages of time, I promise. Your perfect audience is out there, and they don’t care that you’re not 25 and beautiful. They’d rather benefit from the wealth of experience and wisdom you’ve gathered that only comes with age.

Lie #2: No one will buy my music because they can just listen to Spotify

This one is a killer. Lots of musicians get riled up about this and it turns into a negativity fest!

The truth is, you CAN sell music to true fans. People will listen on Spotify and you should have your music there. It is a great discovery avenue and a sampling ground.

But if you make it your priority to make “true” fans, engage with them in as many ways as possible to nurture your artist to fan relationship, you WILL sell your music to them.

In fact, they’ll be so excited to support what you’re doing, it won’t stop there. They’ll want VIP events, they’ll want paid fan clubs with special perks, and they’ll invest in the highest reward level on your next Crowdfunding campaign.

Lie #3: There are SO many artists out there in my genre. I can’t compete!

Now this one is just silly.

So many factors affect whether someone will become your fan.

2. Your songwriting or choice of songs

3. Your personality and charisma

4. The subject matter of your music (do you have a unique message?)

And so many more. Just think about something like Lilith Fair. There were a lot of similar artists coming together in one place. And yes, everyone attending had their favorites. But people went to see them all, because they all had special, individual qualities that made them uniquely appealing.

I can certainly be a big fan of Sara Bareilles AND Ingrid Michaelson AND Missy Higgins AND Rachael Sage.

Lie #4: I have to have a record label, a manager and a booking agent to have a real career

This is the worst one of all.

This is the one that kept me stuck – my career was literally standing still for 10 years – unable to move forward in ANY meaningful way.

Had I understood that I didn’t need any of those things to start building something, I could have taken action (even small action) and seen results. I would have then gotten excited about the small results and continued to do those things, then adding more actions. It would have been a perpetual cycle of awesome!

After 10 years, I would have build an email list and social media following that could easily support my career.

But I didn’t! And I lost all that valuable momentum-building time. Trust me, I used to kick myself about it everyday.

But instead, I decided to go on a mission to make sure YOU didn’t get paralyzed by the same lies I did.

How The Music Industry Works And Why We Must Fight Back

Here’s the thing: Once I did start taking action, I grew my music career from COMPLETE scratch. I didn’t really know what I was doing. But I got advice from trusted mentors and most importantly, I kept moving forward, taking action, no matter how small.

Was it easy? No freaking way. But it most definitely is possible.

And it most definitely is rewarding, especially if you’re like me. I was haunted by dreams of a music career for so long. It was in my veins, my DNA and it wasn’t going to let go of me until I did something about it.

Here’s the catch: creating a sustainable music career DOES have a lot of moving parts. If you don’t have a solid system to follow, it can get messy, frustrating and overwhelming.

You will definitely feel overwhelmed and confused about what to do when, and how to do it.

Check out The Musician’s Profit Path: The 5 Stage Blueprint to Produce Massive Growth In You Fan Base & Sustainable Income for Your Music Career and start taking action today to obliterate the lies and build your career on your own terms.  You’ll be building an asset, your fan base, that will sustain your music career for years to come.