How A Major Performance Changed The Course of My Music Career

As a musician, I’ve had quite a diverse background. In high school I sang with Madrigal groups, did classical solo competitions and a major performance of a Christian concert at a marine base,, and even was the lead in a women’s Sweet Adeline’s style quartet (gotta dig up a picture of us in our hobo outfits singing “Side by Side”!)

In college I studied classical voice and opera (I am a lyric soprano), singing a lead role in The Marriage of Figaro, while simultaneously performing in a touring group that performed positive pop/rock (with a full band) and a capella arrangements. That’s where I cut my teeth as a performer.

After college, for the first 10 years of my career I did everything from being a paid soloist for Vivaldi’s “Gloria” & Mozart’s “Mass In C Major” to singing Shania Twain & LeeAnn Rimes at weddings to rocking out as lead vocalist for a band that played Green Day, Jennifer Knapp and Vertical Horizon.

So was I a Classical Diva, a Country Karaoke Queen, or a Rocker Chick?

You’re guess was as good as mine. We’re talking Identity Crisis!

Because I had such a wide range of ability and a diverse interests, I could handle many different styles and lots of performing arrangements. Was this a good thing? Yes and no.

Since I “could” do all these things, I “did” do ALL of them. It was fun, it was challenging, and it was confusing.

What did I want to “be” when I grew up, or rather, grew into my identity as an artist? I had no clue.

All of my confusion, my identity crisis angst and lack of direction came to a head when I was about 30.

How A Major Performance Killed My Music Career

WAIT! A classical lyric soprano singing Third Eye Blind and The Goo Goo Dolls? How does that work?

Well, I pulled it off. But it WASN’T me. You can hear for yourself if you listen to this short clip I dug up on CDBaby from our only CD of original music (check out the song Higher Places).

But the founder had BIG dreams, big plans and seemed to have the drive to get us there. So I adapted my style, my persona and my career desire to match hers, all in the name of “making it.” 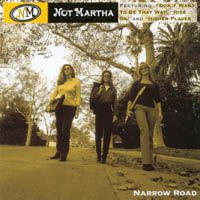 Just look at this picture I resurrected from the archives.

Who walks down a suburban street carriying a keyboard – just saying!

Was any of this branding “me”? Absolutely not! I don’t even like wearing sunglasses. And I’d never haul my keyboard around that way. I have a giant case with wheels (the only way to go)!

But I played along, because I wanted a music career, and I thought this was the “magic bullet” for me.

We had been playing gigs around Orange County, and finally landed a pretty lucrative show at a good-sized venue.

I was excited about this major performance! I was READY. I told everyone about it. I just knew this was the beginning of something big.

And then I got on stage.

It was like I was inside of a dream, watching myself perform. I think back to it now and it still feels that way. It was like watching some other band on TV performing. I thought, who is that girl trying to be something she’s not?

When it was over, I didn’t even acknowledge all the accolades, the congratulations and the “high fives.” They didn’t even register because it was like they were for somebody else. And in a sense…they were.

At that moment, I knew I’d never succeed as a part of Not Martha, not because we didn’t have the talent and the drive to make it, but because I could never put my whole heart into something that was clearly “someone else’s dream.”

And that major performance was the beginning of the end for Not Martha. It ended badly as bands often do for the common reasons that they do – musical differences, lack of shared vision and values. and lack of unified commitment.

How A Major Performance Jump-Started My Music Career

Before that gig, I was “all in”, but for the wrong reasons. That experience was the turning point for my career because I realized I needed to find a direction for my career where I could be “all in” and not feel like a fraud.

So I embarked on the journey to “find my musical self.” It took some real soul searching, some deep thinking, and then a lot of self-examination.

Who was I REALLY as an artist?

What did I REALLY want from my music career?

What did I learn? Well I’ll have to save that story for next time – this is getting long:)

But once I got real with myself and put that all down on paper, then, and only then, could I start to craft a plan to take me there.

How To Jump-Start YOUR Music Career

And that’s what I love about my program The Indie Music Profit Plan. We don’t jump right into online platforms, marketing, list building, fan engagement and income strategies right out of the gate. First, you have to do the tough, get real with yourself but incredibly rewarding work of uncovering your true artistic identity.

We start with your core values, because they are the bedrock of your music career. If I had determined my core values first, I would never have found myself on an album cover looking like a wannabe tough chick in shades!

Then we identify your aspirations, vision and the legacy you want to leave with your art.

Only then, once you’ve done that important soul mining, do you start to get more specific. We create a 90-day plan that focuses on 5 goals, and one “master” goal (like the one ring to rule them all.)

Then we get into the nitty-gritty where we list out the specific actions you can take to achieve these goals. We use a scoring system to prioritize them, and then we commit them to your daily calendar so they ACTUALLY GET DONE.

But I’m getting ahead of myself (I just love this stuff).

The big point I want to get across is that until you REALLY know what your best, most authentic “artistic self” looks like, any goals you commit to and any actions you take to achieve those goals will be worthless.

I found out the hard way. I committed 2 years to a band that was ALL WRONG for me. I want to save you that pain, that wasted time, and, let’s be honest, embarrassment.

And that’s what allows me to create a “no judgement zone” in my programs. I’ve been there and I’ve done a lot of “wrong” stuff along the way. But only through making those mistakes and then taking stock of those mistakes could I ever have found my true calling as an artist.

Let me help you establish a firm foundation for your career so you can jump right into the good stuff – making and selling music, building a fan base and yes, making money. Don’t worry, we cover all that too.

My new program The Indie Music Profit Plan is open for enrollment.

The first Module covers everything I just talked about – the essential inner work you MUST do to build a solid foundation for your music career to stand on.

Skip this and you will regret it, I promise (and I definitely know from experience!).

So jump on in with me and get your hands dirty! What your self-discovery uncovers isn’t always pretty, but it’s ALWAYS beneficial. You can’t move forward without it.

Let’s do this together.

PS: If you invest in the Indie Music Profit Plan, you will not only be enrolled in the 12 week class and have the support of me and the other students, but you will also receive the course bonuses outlined on the Program Page and any future bonuses but ONLY if you sign up as a VIP Here.