FEM48 How To Sell Songs & Albums Without A Record Label

FEM48 How To Sell Songs & Albums Without A Record Label

One time I recorded an album…and no one bought it.

OK, I supposed if you count my mom, my dad, my cousins, and a few of my subordinates at work who felt obliged to buy it…then I guess 10 people bought it.

I couldn’t figure out what all the successful Indie artists I saw around me selling multiple albums, over-funding their crowdfunding campaigns and selling out big venues were doing that I wasn’t.

Listen to the next lesson in this series: How To Become a Successful Artist by Avoiding These 5 Crippling Mistakes

How To Sell Songs & Albums By Learning By Example

I started to study the successful Indie artists I looked up to to see what they had that I didn’t and I started to see an obvious pattern. I finally discovered the missing piece of the puzzle that no one had taught me in business school, none of my band members were focusing on, and none of my musician friends were talking about…yet it was the most vital step to making sure the next project I did – CD I put out, crowdfunding campaign I launched, venue I needed to fill – would be a success. So what was it?

They had built a large fan base of loyal fans who were eager to buy from them, attend their shows and support all of their projects that they could access immediately, at the push of a few buttons through their email list.

I became obsessed with cracking the code on how to build my email list.

Over the next 3 lessons I’m going to teach you what I learned. I’m going to give you a process and a framework that you can use to turn the cycle of failure and obscurity around.

Before you have the urge to record a new CD because you think a new album will be the breakthrough you are looking for…Instead of booking the recording studio and starting to pick out your cover art, I want you to STOP and go through this framework first.

How To Sell Songs & Albums By Building An Email List

I want you to picture your email list as a group of people who are eager to buy from you.

You know how when Taylor Swift announces a new concert tour – tickets sell out within the first few hours. Why does that happen and you can’t sell more than 10 CDs? It’s because Taylor Swift has build a fanbase that is eager to support her with whatever project she does.

That’s what an email list can do for you.

Before we jump into how to build your email list, I want to give you a few examples of what you’ll be able to do once you have an email list

Katy Laurel has launched multiple kickstarter campaigns to fund her albums, all backed by the fans on her email list. 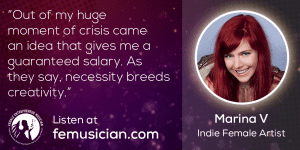 Marina V has created her 2 songs a month subscription club that brings in $1200 per month steady income and funded a European tour all by appealing to her email list.

I want you to take those 3 stories I just gave you and put them in the back of your mind and use them as motivation, as inspiration, as an example of what’s possible when you adopt this new way of thinking about your music career.

The Cycle of Guaranteed Failure

Tell me if this process sounds familiar? First, you write a bunch of really great songs. Then you decide – these songs are SO amazing, the world needs to hear these songs, so you search for the best producer in Nashville because you know these songs deserve the best. You book the producer’s time, the studio, a hotel and a flight. You then realize you’re going to need $15K! You scrape the bottom of your savings account, or you take out a loan…because you’re so far down this path of excitement about your new CD – no amount of good sense and reason will deter you. You lay down the cash, make the album and eagerly await the boxes to arrive. You’re convinced this album is a SMASH. You know you’ve invested your hard earned money and your heart and soul into this album…it has to be a hit.  When the boxes arrive you tell all your friends about it, you plaster Facebook with pictures of the album art, you send some off to Amazon and CDBaby – you’re ready for the sales to start rolling in and your songs to jump onto the charts.

Instead…crickets. You sell a few copies – one to your mom, and one to your next door neighbor who saw the UPS truck arrive and was so curious what all the boxes were that she ran over and then felt like she should buy one.

Now you’ve got a stack of boxes in your garage that makes it hard to get to your sports equipment…does that sound familiar at all? That’s called the cycle of guaranteed failure. There are 4 steps:

Does this sound familiar – raise your hand? I’m raising my hand, I’ve been through it.

Now I want you to promise me…I will never, ever, EVER do this again.

The Secret of How To Sell Songs & Albums

There’s a completely different framework you need to follow. And in the next two lessons we’re going to go over it in detail. But before we do that, you need to completely change the way you think about and act in your music career.  So you know all the stories you’ve seen of overnight success, or people getting their CD to an influential radio producer, getting it played and having an instant hit, or of someone handing their CD to some Music Industry big wig and getting signed the next day to a record deal with a six figure advance…completely ignore all of that.

The first thing you need to do is answer this question…why. Why do you want to build a fanbase…a group of people that love your music and want to support all your projects – your next CD, your live events, your digital fanclub – whatever it may be. Why do you want that. What would it do for you? How would your life be different? Because without a clearly articulated “why” – you will not have the persistence, the resolve and the dedication to actually get there. There’s nothing worse than getting halfway to your goal, and then quitting because you lost connection with the reason you wanted to do this in the first place.  So the very first thing I want you to do is write down “why” you want to build your fan base – this living, breathing asset that will be the thing that gets you to that goal.

Here’s the example of my why when I finally wrapped my head around the importance of building a fanbase.

“I want to build a solid fanbase so I can quit my creativity-killing corporate job and use my God-given talents to create my art and use it to inspire, enlighten and enrich the lives of others. I want to be able to tour and book shows without having to make tons of cold calls. I want to be confident that I can fund my next CD project at the quality of production my songs deserve. I want a music career with some level of job security.”

Get this down on paper. Then I want you to find one musician friend to go through this mini class with you, share this journey and hold you accountable to doing the things I outline in these podcasts. So action item #1 is define your goal, #2 iinvite one person to share the journey with you.  Get to work and we’ll see you in the next class.

Preview of the next lesson: We’re going to cover the process and specifically 5 mistakes you need to avoid when going through this process.

Listen to Lesson 2: How To Become A Successful Artist by Avoiding These 5 Crippling Mistakes